I listened to a radio program discussing how the vast US agricultural industrial complex is leaving us malnourished while trying to provide affordable food to the rest of the world. It stated that the majority of US eaters are consuming way too many empty calories, synthetic food additives, pesticide residues, bad fats, genetically engineered ingredients, and woefully few micronutrients, vitamins and minerals. In addition, undernourished populations around the world generally only receive grains produced using synthetic fertilizers, toxic insecticides, and genetically modified seed technology.  The ultimate take-away suggested that small farms and local food economies are the best solution to solve the differing forms of malnutrition. We agree.

To its credit, US agriculture is extremely efficient. Farmers are able to use specialized equipment and newly invented chemicals to produce more grain, meat, and milk with less manpower. Take some knowledge; throw in some capitalism, post-war industrialism, a little entrepreneurship, creativity, and amazing things happen. Things developed one tiny creative idea at a time, all the way along, since Native American people taught the early settlers about soil fertility. Land-Grant Universities around the country run research trials to evaluate the effectiveness of all this technology and disseminate the findings through the cooperative extension system. If we were to run out of food, a shortage would have national security implications, so there are incentives to overproduce. The USDA purchases this surplus for the school lunch program and for other food programs, which helps keep markets stable.

The industrial food complex adjusted when environmental impact evidence became clear. All it took was Rachel Carson’s Silent Spring book, DDT, and Alar, to get everyone’s attention. However, some of the practices just became more insidious with a less visible negative impact to the environment. The advent of genetic engineering to produce super foods is where things went too far.

Once a company was allowed to patent genetically modified seeds, farming methods took a dramatic turn. The development was sold as a way to reduce chemical applications, therefore good for the environment. Early methods involved blasting a plant with foreign genes, and then growing out the resulting chromosomes with tissue culture technology. Depending on where the foreign gene landed on the chromosome, determined how well the new traits were exhibited. Now, a bacterium is used to deliver the desired gene to a specific site on the chromosome to achieve the desired outcome. By doing this, these genetic mutants actually reproduce the pesticide within each cell division. Some traits that have been developed are the ability for the crop to not be harmed when a powerful herbicide is sprayed on the crop. The farmer can make one pass over the field to plant the seeds and another a few weeks later to kill any weeds that remain; insects and diseases are already taken care of from the seed. Pretty cool, huh? 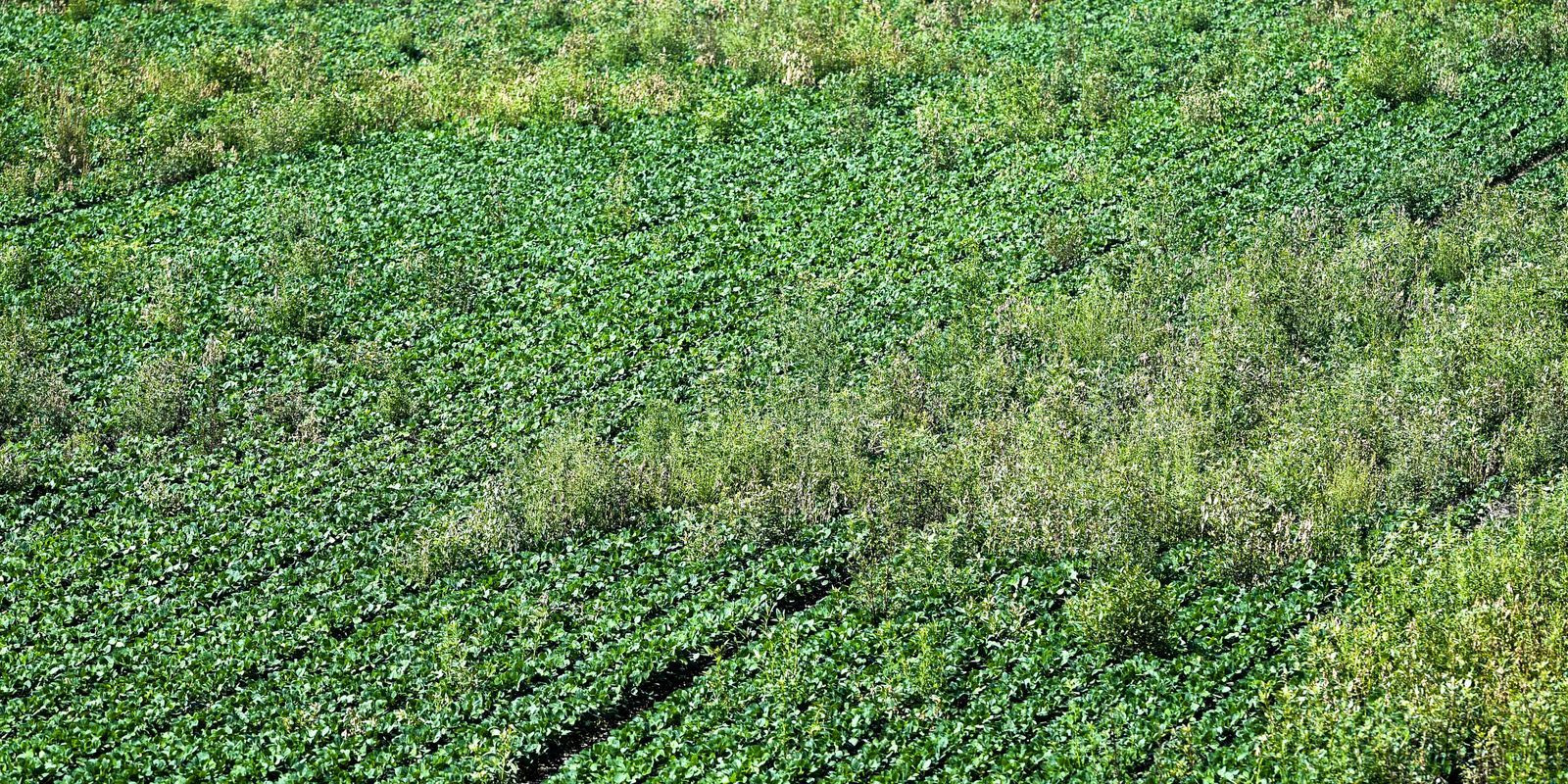 No! Plants and insects and diseases all adapt to their environment, and the new technologies are already beginning to fail. There are now ‘superweeds’ that no herbicide can kill. (See example above of a soybean crop with ‘superweeds’.) Farmers are pulling out antique tillage implements to control these weeds. There are now crop pests that no insecticide can kill. So the current solution is to add different genes to the seeds called ‘stacking.’ This is all so short-sighted, but is the trend rolling right along in mainstream agriculture.

Essentially all soybeans are genetically modified unless they are certified organic. Soy oil and the resulting meal are used in thousands of products found in your local grocery store. Most corn is now genetically modified unless it is certified organic. Yes, even the sweet corn found at the markets this time of the year. Genetically modified corn is also in thousands of products in your local grocery store. The other problem with corn, in particular, is that the mutant corn pollen drifts in the wind potentially polluting organically grown corn. Even some native maize varieties in Mexico are now showing contamination.

Since seed companies are allowed to own the genetics of the seeds, farmers cannot save their own seeds for next year’s crop.  With the flow of genetically modified seeds into developing countries, it is now virtually impossible for farmers to save seeds as a sustainable agriculture practice. They are now totally dependent on others to supply their food.

Striving to feed the world is the right goal, but the evolved decision to do it industrially isn’t working. Food related diseases are going with these foods. People may have a full belly, but other problems are showing up, which fits the definition of mal-nutrition in my book.

At the local level, our farm works with intent using time-tested methods of organic food production that respect the laws of Nature, and we provide quite a bit of food for many families. Just think if more people recognized the value of eating from local farms and recognized that the methods of production of that food are just as important.  As those with means spur demand for good food production, farms will create efficiencies in response to local demand, and nourishing farm food becomes more accessible for all. Small farms will come back and flourish all over the world. We can strengthen local economies and raise healthy children, by decentralizing the food supply. You know how poorly you feel all day when you only eat Lucky Charms for breakfast; just think how productive the world could be if everyone was properly nourished.

This is a collection of our thoughts, stories, new products, and recipes.

Become an Owner
Click the picture to start shopping!